“Have you argued with someone and you parted dissatified?” my riding instructor asked. We stood by a horse that had just arrived to partake in training. The owner of the horse described the horse, among other things as hard on the reins and stiff to the sides and always in a hurry and the owner wanted him “fixed.” “Yes, I recall such an incident when that has happened,” I answered hesitently in deep thought.

“How did you feel when you met again after the disagreement?” asked the instructor. “Not well, if I remember correctly”, I said, not excited to share my story. “You probably remember it as well as you are standing here with me. But does it matter how long, whether it be hours or years, between parting ways dissatified and then meeting again?” he continued to harrass me. “No, it doesn’t matter,” I said defeated.

“That is the same with horses. If a horse is dissatified with a rider at the end of their session, then it will show in the beginning of the next one. The horse remembers being upset despite the reason and will show it with rebellions often small. If the upsetness repeats itself continuously at the end of a training session, then tension builds up rather quickly like is the case with this horse right here. Though he will have time off to recover for a long time, the tension does not release itself and another method is needed to release such tension,” the instructor concluded.

“But how can you be sure a horse is upset or dissatified at the end of a riding session if the recistance caused by dissatifaction is very small?” I asked curiously. “Often the dissatisfaction  of a horse will not be uncovered until at the beginning of next riding session. So, I feel it on my own skin that a horse is dissatisfied if I am honest with myself. In my experience I have found that if I am dissatisfied then it is highly likely that the horse is dissatisfied also. The ruel is, either we are both happy or both unhappy.  I have to then demand less from the horse in the next riding sessions so that the effects of the previous riding session are minimized.” With that we ended our conversation.

“Are you and your horse always happy with each other?”

In the picture are three friends (from left) Páskalilja, Edda Margrét and Elja 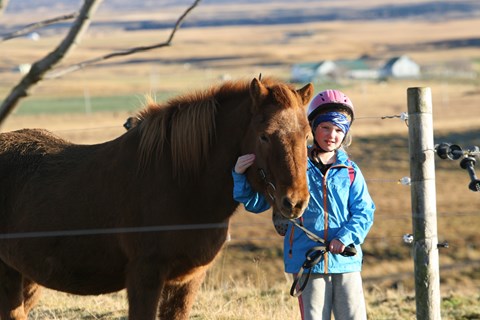