Þeyr is a light built, long legged beautiful stallion with excellent temperament. He is tall and handsome, with five clear gaits. All movements are characterized with suppleness and high leg action, and he is a joy to ride.  Not only is Þeyr an important breeding stallion in Holtsmúli, but also, he and Svanhildur have an impressive record in competition.   They hold several titles in five gaited competition such as Reykjavik champions in five gait, Southern Iceland regional champions in five gait, and they have also twice won the Landsmót Áhugamanna in five gait.

Þeyr´s offspring are already doing really well at foal shows, and at the age of 7 he was the sire of the best two mare foals here in the Southern part of Iceland.

Unfortunately we lost Þeyr at the age of 14 due to bacterial infection.   He was an important part of our equestrian life and we will miss him. 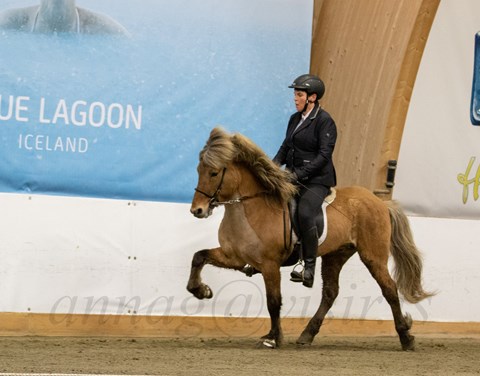